The Solemnity of the Most Holy Body and Blood of Christ is traditionally called Corpus Christi, which means “Body of Christ” in Latin.

The feast celebrates the most important dogma of the Catholic Faith, the Real Presence of Jesus in the Eucharist – Body, Blood, Soul, and Divinity.

Corpus Christi is a moveable feast, so it takes place on a different date each year.

It’s traditionally celebrated on the Thursday after the Solemnity of the Most Holy Trinity. When it takes place on this day, it’s sometimes observed as a Holy Day of Obligation.

Last Sunday was the Solemnity of the Holy Trinity which makes today, June 11th Corpus Christi in some places.

In the United States it’s observed on the Sunday after the Solemnity of the Holy Trinity which makes this coming Sunday, June 14th Corpus Christi!

Juliana of Liège, also known as Juliana of Mont Cornillon, was a nun and mystic. She lived from 1193-1258 in what is now Belgium and experienced many trials throughout her life.

Juliana received a series of visions of Jesus. He told her to work to establish a liturgical feast for the Holy Eucharist.

For years she devoted herself to the Lord’s command. Finally, in 1246, she convinced the Bishop of Liège to celebrate a feast dedicated to the Eucharist in his diocese.

Juliana had a great devotion to the Eucharist and is now a canonized saint. 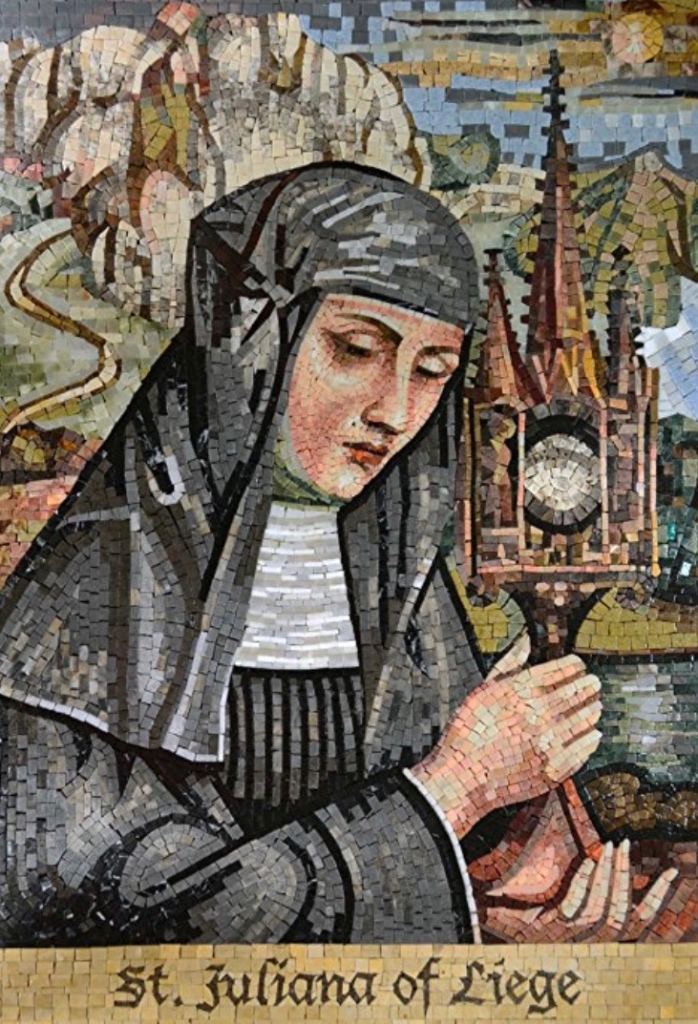 In 1263 Fr. Peter of Prague, a German priest, made a pilgrimage to Rome.

At that time, there was growing debate among certain theologians who questioned if the Body and Blood of Christ was truly present in the consecrated bread and wine.

It was the first time in Church history these ideas about the Eucharist, which are false and contrary to Catholic teaching, arose.

Fr. Peter was influenced by this debate and had doubts about the Real Presence of Jesus in the Eucharist.

He celebrated the Holy Sacrifice of the Mass in Bolsena, Italy. As he said the Prayer of Consecration, blood started flowing from the consecrated host onto the altar!

Fr. Peter reported the amazing event to Pope Urban IV who was nearby in Orvieto.

The pope sent delegates to investigate and ordered for the host and blood-stained corporal to be taken to Orvieto.

The event was determined to be an authentic miracle. The relics were placed in the Cathedral of Orvieto and are still there for veneration.

In 1264, six years after St. Juliana’s death and one year after the miracle, Pope Urban IV extended the Solemnity of Corpus Christi to the Universal Church.

He celebrated the universal feast for the first time at the Cathedral of Orvieto, the location of the relics.

The pope asked Thomas Aquinas, a Dominican priest who became a Saint and Doctor of the Church, to compose the Mass and Office for the feast.

He wrote many hymns in honor of the Most Blessed Sacrament: Pange Lingua, Tantum Ergo, Panis Angelicus, and O Salutaris Hostia.

These beloved hymns are sung on Corpus Christi and throughout the year during Exposition and Benediction of the Blessed Sacrament.

On the solemnity it’s tradition to hold a Eucharistic Procession in the streets or in churches.

The consecrated host is placed in the monstrance and carried by a member of the clergy. Those present say prayers and sing hymns as the Eucharist is carried and adored.

At the end of the procession, those present are given a blessing and special prayers are said – known as Benediction.

Traditionally, the procession was the feast’s most significant feature.

It was a special event in which all participated, including: monarchs, princes, public officials, and members of guilds.

Eucharistic Processions aren’t as widespread as they used to be on this feast, but the pope still leads the procession every year in Rome.

The Feast of the Body and Blood of the Lord and the procession with the Blessed Sacrament, celebrating the sacrament and signifying God’s presence in our world and in our lives and reminding us of our common pilgrimage to Heaven, is a prayerful and edifying act of the entire Church. Devotions are generally not mentioned in the Code of Canon Law. However, because of its importance in the life of the Church it is referred to in canon 944: “When it can be done in the judgment of the diocesan bishop, as a public witness of the veneration toward the Most Holy Eucharist, a procession is to be conducted through the public streets, especially on the solemnity of the Body and Blood of Christ.” (Eucharistia.us)

The faithful who piously participate in solemn Eucharistic procession, either inside or outside of a Church, especially on the Solemnity of the Body and Blood of Christ, may receive a plenary indulgence.

The following text is the last two verses of Down in Adoration Falling. This hymn, called Tantum Ergo in Latin, was written by St. Thomas Aquinas for the solemnity.

The Latin text is below, followed by the most common English translation.

Click here to listen to the hymn in Latin.

Down in Adoration Falling

Down in adoration falling,
Lo! the sacred Host we hail;
Lo! o’er ancient forms departing,
Newer rites of grace prevail;
Faith for all defects supplying,
Where the feeble senses fail.

To the everlasting Father,
And the Son who reigns on high,
With the Holy Spirit proceeding
Forth from each eternally,
Be salvation, honor, blessing,
Might and endless majesty.

Let us pray: O God, who in this wonderful Sacrament left us a memorial of your Passion: grant, we implore you, that we may so venerate the sacred mysteries of your Body and Blood, as always to be conscious of the fruit of your Redemption. You who live and reign forever and ever.